Anzac Day is celebrated in New Zealand and Australia. Many attend the Dawn Ceremonies around the country This is a very important day in our history. So on this day, I can do nothing better than copy from my other blog the post from three years ago April 25, 2019.

They shall grow not old, as we that are left grow old:
Age shall not weary them, nor the years condemn.
At the going down of the sun and in the morning,
We Will Remember Them.”
LAWRENCE BINYON 1869-1943,
English poet, dramatist and art scholar. 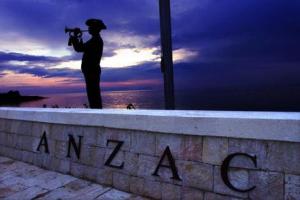 April 25 in New Zealand and Australia is celebrated in remembrance of all those who have fought, suffered and died in wars. In both countries, it is a Public Holiday. Services of Remembrance are held throughout both lands. And on this day, in Gallipoli in Turkey, those brave souls who suffered and the many who died are also remembered.

During my recovery period in 2016, my number three Grandson, Drew took me to an exhibition on Gallipoli. What follows is what I wrote after attending that exhibition.

After a nasty accident that caused severe brain injury, I spent seven weeks in hospital and at ABI rehabilitation.  Now thanks to the teams at both places I’m well on the way to recovery. Back home again and ready to post on my blog.

One of the most annoying aspects is that with brain injury driving licences are suspended for six months until a doctor certifies you can drive. So currently I’m very dependent on family, friends and Driving Miss Daisy to take me around.

On Tuesday this week, my No 3 grandson Drew took me to our National Museum, Te Papa (Our Place in Maori) to see the Gallipoli Exhibition  This tells the story of the landings on April 25. 1915

On that day, thousands of young men, far from their homes, stormed the beaches on the Gallipoli Peninsula in what is now Turkey.

For eight long months, New Zealand troops, alongside those from Australia, Great Britain and Ireland, France, India, and Newfoundland battled harsh conditions and the Ottoman forces desperately fighting to protect their homeland.

By the time the campaign ended, more than 130,000 men had died: at least 87,000 Ottoman soldiers and 44,000 Allied soldiers, including more than 8700 Australians. Among the dead were 2779 New Zealanders, about a sixth of all those who had landed on the peninsula.

New Zealand sent more men to fight in the First World War per head of population than any other nation. Of those killed, almost a third were buried half a world away in unmarked graves.

This exhibition tells the story from the standpoint of those young men.  It is incredibly detailed and we are shown where they stood their ground against an incredible army of Turks.  We see how they lived and we hear readings of letters home.

One of the standout officers wasAnd  Lieutenant-Colonel William Malone (1859-1915) , a Stratford farmer and lawyer, who commanded the Wellington Battalion at Gallipoli. The Wellington Battalion landed at Anzac Cove on 25-26 April 1915. Malone soon began to impose order, transforming weak defensive positions along the Anzac perimeter into strong garrisons. Between June and August, he helped consolidate critical positions at Courtney’s Post and Quin’s Post.  Just one of many no doubt.”

What a terrible waste of so many young lives, and yet, over a century later, we continue to send our young people to war – doing the same things all over again and expecting different results. Will we never learn !

And just today I learned.

“At about 5pm Malone was killed by shrapnel from an artillery shell, probably fired by a Royal Navy warship or a New Zealand howitzer. A few hours later the Wellington Battalion was relieved and withdrew from Chunuk Bair. The Wellington Battalion had been destroyed. Fewer than 10 per cent of the 760 men who had seized the hill in the morning walked off Chunuk Bair. William Malone has no known grave and, like those of more than 300 of his men, his name is recorded on the New Zealand Memorial to the Missing on Chunuk Bair. He had gone into the battle expecting to die. On the eve of the offensive, he wrote to his wife that:

“I am prepared for death and hope that God will have
forgiven me all my sins.
My desire for life, so that I may see and be with you again,
could not be greater,
but I have only done what every man was bound to do
in our country’s need.
It has been a great consolation to me that you approved my action.
The sacrifice was really yours.
May you be consoled and rewarded by our dear Lord.””

William Malone has no known grave and, like those of more than 300 of his men, his name is recorded on the New Zealand Memorial to the Missing on Chunuk Bair.